One Road of Phoenix’s Pizza Evolution Leads to Rome 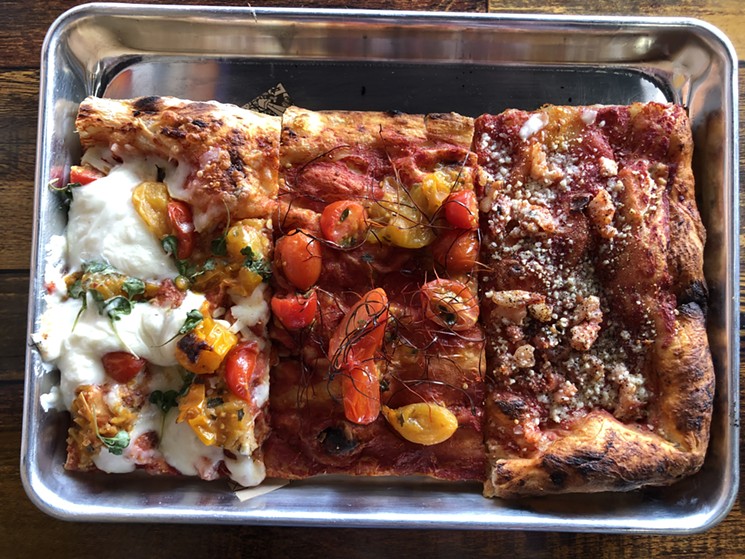 Roman-style pizza has come to the Valley of the Sun. Here, we have a tradition of Neapolitan pizza: pies thin, small and circular, topped leanly in keeping with tradition, blazed in ovens so hot they could melt lead. Roman-style pizza is thick, square and hefty, baked cooler, maximally topped, and comparatively lawless. It can be a lot more fun.

You can find Roman-style slices, snipped from pies with the surface areas of sheet cakes, at Piazza Romana in Avondale, where Justin Piazza just opened shop. You may have tasted his Neapolitan pizza at La Piazza PHX and La Piazza al Forno. With Piazza Romana, he zips two hours up the E45 from Naples to Rome.

Piazza’s movement from Neapolitan to Roman is part of a greater American movement, a nascent one, away from Neapolitan. Pizza began in Naples, so it is fitting that Neapolitan was the first Italian style to fledge in the States this craft-conscious century.

For Piazza, there was fresh intrigue to embracing a complex new pizza style. “This kind of gave me a newfound passion,” he says. “I was bored for a while with Neapolitan. I love it. But after doing it for 11 years, how much more are you going to learn?”

He spent a year and half testing pizza al taglio, the most ubiquitous style of Roman pizza, and the style that people in the U.S. mean when they speak about Roman pizza. (There are a few Roman styles, actually.)

Rome has a food culture that feels endearingly odd next to other regional Italian cuisines. Since the city was founded in 753 BC, it has endured wrenching highs and lows, cycling from monarchy (Iron Age) to republic (middle antiquity) to empire (early first millennia AD) to trash heap (late Renaissance) to Italian capital (since 1871). It's not a notably wealthy city, and its cuisine is marked by economy. Some of the hallmarks of Roman cooking are pork, artichokes, salt cod, offal, fried food, and a handful of pastas, some recently having recently caught on in the States: carbonara, cacio e pepe, amatriciana.

Pizza, though, is where Roman food peacocks some, drifting beyond its plebeian moorings.

Inside Piazza Romana, a mural with the sunset hues of an arcade game spreads. It features a wolf, the animal that plays a key role in the city’s founding myth, and a square of al taglio impaled on a spear.

Across the room: pizza.

Behind a sneeze guard, square fields of pizza sprawl and roll. Sauce fills the hollows, the valleys. Toppings are thin on some pies and paved thickly on others. Filaments of hot red pepper coil like threads of saffron, partly blackened, aromatic. You see microgreens and pepperoni circles, yellow tomatoes and melted onions. Cheese congealed on the cooked pies awaiting your order will ooze again, once they've been pealed through a rectangular oven hatch for a final warming.

The al taglio pizzas are all simple red iterations. They are all labeled. When you order, Piazza skims a teal scissors with quick, studied chops, shearing your roughly three-by-four-inch slice from the great baked mass.

Roman pizza is served by the slice. It has an uncommon lightness for thick pizza. Piazza achieves levity by employing a strain of 00 flour that allows for greater hydration, and by fermenting for 96 hours. Yeast transmutes his dough for so long that, as the days pass and baking in his electric oven at 650 to 700 nears, white tubs of dough jiggle like vanilla pudding.

“I’ve learned how to be a baker with this,” Piazza says. “It’s different than making Neapolitan pizza. If you’re a baker, you can cook any kind of pizza.” His recent education in al taglio included classes at Miami's Roman Pizza Academy and a few days with a Roman-style pizzaiolo in New York City. (He is from Hackensack, New Jersey.)

Piazza has opened Piazza Roman, his third pizzeria, with a simple lineup of al taglio pies.

These include amatriciana, the Roman pasta sauce of guanciale and tomato, but here in pizza form. It has the soulful, lightly funky richness of high-quality pork. He also does an arrabiata, another converted pasta sauce. Cherry tomatoes gush rich, roasted juices; a thinly armored crust shatters with the noise of a tiny earthquake. But his caprese is the 10-out-of-10 perfect slice, perched with teetering globs of thoroughly melted mozzarella, keeping the pie moist and milky.
‍

Piazza believes Roman-style pie is primed to carve into Neapolitan’s American real estate. “I’m not saying one’s better than the other,” he says. “They’re both great, and they both have their own room.”

So welcome to metro Phoenix, Roman-style pizza. Though Chris Bianco does slices he calls al taglio, his method has always been to blend others, and Piazza Romana is nearer to what you can score in Italy’s capital. As the Phoenix eating public and Piazza himself grow more into his style, he plans to bring the Roman topping circus to town. Hopefully, then, eaters with a love for Italy will be able to eat slices heavy with tuna and potato, with mushrooms and stracchino, and recall the orange trees and black stilettos and cobblestones and howling motorcycles of the Eternal City.