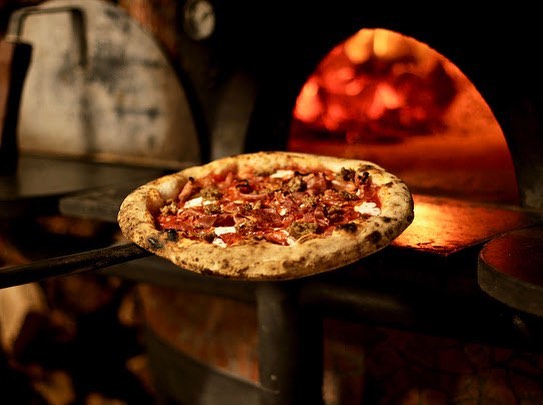 The City of Glendale may grab attention for its big retail developments and the high-tech Cardinals stadium, but to me, the most appealing part doesn't feel like a city at all. Instead, it's got the close-knit charm of Main Street U.S.A. — a rare thing in this sprawling Valley of ours.

I'm talking about that stretch of Glendale Avenue that goes right through downtown, where it's walkable in a leisurely, small-town way. Antique stores, specialty shops, and little indie restaurants line the street, and there's even a tree-filled park at the heart of it.

Hands down, one of the highlights of this appealing little oasis is La Piazza al Forno, a family-owned and operated spot that brings plenty of personality to the area (especially considering that the space was once a cookie-cutter Quiznos). I don't know about you, but I consider a casual, reasonably priced Italian joint — where you can dig into a plate of pasta, or just grab a pizza to go — a neighborhood must-have. The folks who live in this particular 'hood are lucky, indeed.

You can actually smell the fantastic aroma of pizza from down the block. Inside, the restaurant is bustling with all kinds of people — office types by day, and lots of families in the evening. In the middle of the action, tossing handmade dough in the bright open kitchen, is chef Justin Piazza, who owns La Piazza al Forno with his wife, Rachel. They opened the restaurant a little over a year ago and have quickly built a loyal following, thanks to Piazza's delicious pies.

Piazza grew up in the restaurant world. His dad, Dennis (who also works in the kitchen here) used to own Amici's, at 43rd Avenue and Olive, and some restaurants in New Jersey, where the family used to live. Now that he has his own place, Piazza's a permanent fixture next to the huge brick oven, which was imported from Italy. Customers seated at the nearby counter can watch him make the pizzas, and sometimes he'll take a minute to chat. Meanwhile, Rachel's usually out in the dining room, waiting on customers, along with her mother-in-law, Anita.

Oak and pecan wood give the wood-fired pies a hint of savory smokiness. Piazza's crust is thin but sturdy, with a crisp exterior that gives way to a firm, doughy middle. It holds up pretty well beneath the generous toppings, which is a good thing — there are 20 different ones to choose from, including anchovies, caramelized onions, and artichokes.

You can dress up The Goodfella, which is a basic margherita pie, or just go with one of the specialty pizzas, like the awesome Italian Stallion, layered with tomato sauce, mozzarella, and slices of pepperoni, prosciutto, sausage, and sopressata. If you have any kind of carnivorous urges, this is the pizza for you.

Meanwhile, the outstanding white pizza, called La Piazza Blanco, is heaven for garlic lovers. Piazza dots it with melted garlic butter, loads it up with a layer of mozzarella and gobs of ricotta, and adds basil and more fresh garlic. As much as I liked the standard pizza here, I liked this one even more. And for something a little different, The Mediterranean comes slathered with pesto instead of tomato sauce. Feta cheese gives the melted mozzarella a salty boost, and a scattering of sun-dried tomatoes adds bursts of flavor to every bite.

I say you should save room for pizza, but if you have your heart set on an appetizer, go with the tender calamari, sheathed in crisp, light batter and served with marinara. The portion was surprisingly large, enough for a few people to share. But the Caprese didn't completely wow me. Fresh mozzarella was the real star, and plenty good on its own, but if the tomato had been a little more ripe, I would've been happy.

La Piazza al Forno has quite a few entrees to choose from, mostly revolving around pasta. Surprisingly, there was nothing special about the spaghetti with meatballs; perfectly al dente linguine, heaped with lots of chopped clams in a garlicky white sauce, was the better choice. It's also available with red sauce.

Chicken Marsala was the single true letdown here. Even though the mushroom-studded Marsala wine sauce was delicious enough to soak up with bread, the chicken was dry and tasted faintly of freezer.

But I can't say enough good things about the mouthwatering chicken pesto lasagna, bursting with pesto cream sauce, mozzarella, and moist shredded chicken. It was stunning from the first bite, so velvety and rich. I enjoyed the traditional baked meat lasagna almost as much, thanks to thick layers of cheese and a blanket of chunky tomato sauce. Both dishes had that wonderful oozy quality of good lasagna — the kind that makes you end up cleaning the plate.

Another stellar pick was Mediterranean ravioli, which turned out to be the envy of my dining companions. Plump, round ravioli stuffed with cheese, a handful of sautéed mushrooms, and a liberal dousing of olive oil and balsamic vinegar — pretty simple, yes, but there was some kind of delicious flavor alchemy going on between the creamy cheese and the tangy balsamic that elevated the dish beyond its basic components.

No matter how much you've gorged on pizza here (and believe me, I understand how easy it is to do), you at least need to have a cannoli for dessert. These were really tasty, with fresh, crunchy shells that were just tender enough to gently break with your fork (kind of like good pie crust), and creamy, not-too-sugary filling.

Hot, sugar-dusted zeppoli — golden blobs of fried dough — were satisfying in the way that anything fried and sugar-dusted usually is, but I liked the New York cheesecake much more. It was ultra-smooth and fresh, drizzled with raspberry and chocolate sauces, and had a pleasing sweetness. Without a doubt, I knew it was homemade.

At a mom-and-pop place like La Piazza al Forno, I couldn't ask for anything more.