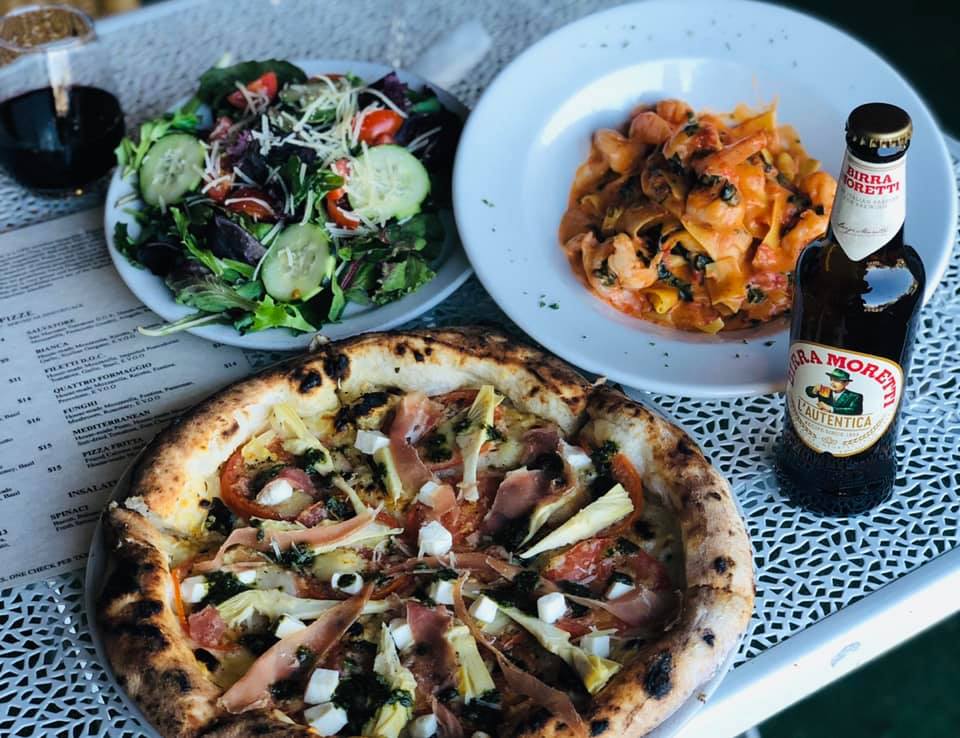 When I was a kid slaving over my Easy-Bake Oven, I used to think iceberg lettuce sprinkled with sugar was a great salad. I thought Chef Boyardee from a can was the finest in Italian cuisine.

Years ago I thought chain pizza was perfectly acceptable. Then artisan pizza came along and spoiled me. The crispy, chewy crust with spots of charring from the wood-fired oven. The thick, rich sauce with real Italian tomatoes. Cheese that doesn't come from a green container. It's like Plato's Allegory of the Cave. Once you've seen the light, you can never go back into the darkness and watch only shadows.

Scene: In Glendale, the light shines on La Piazza Al Forno, a little café that has been turning out wood-fired pizza and pasta in the historic district since 2007.

The owner of this pizzeria has such a great name, you'd almost think it's made up: Justin Piazza. But believe it, and believe in his pizza. Since opening, La Piazza has received much acclaim, great customer response and was featured on the Food Network's "Diners, Drive-ins and Dives."

But success hasn't gone to Piazza's head. If you haven't yet jumped on the bandwagon, it's time to climb on board.

Food: Big salads are standard fare at many Italian restaurants. Ho hum. But the Insalata Piazza ($10) is something special. It's a heaping bowl of fresh greens, lightly dressed and packed with thin strips of prosciutto with almost a nutty flavor, slices of salami, red onion, olives, tomatoes and strings of fresh mozzarella. The cheese is made in house. The salad is family size, but you still might take some home.

This could be a whole meal for one. How often do your dinner guests ignore the piping hot pizza that arrived at the table in favor of eating more salad? It's that good.

Now is the time to multi-task. You can go on eating salad while you dig into the Piazza Blanca, or white pizza ($12), a pie sans tomatoes that's topped with garlic butter sauce, ricotta cheese, mozzarella, garlic and fresh basil. You won't even miss the red sauce. The ricotta is so soft and fluffy it's like eating a cloud of whipped cream.

If you can't think of pizza unless it has something red smeared across it, the classic Margherita ($10) is the way to go. The ingredients are simple: tomatoes certified from Italy (D.O.P), house-made mozzarella and whole-leaf basil. This is the standard by which you can judge one pizzeria against another. La Piazza's holds it own and better.

The crust, of course, reigns supreme. It's made crispy in the wood-fired oven, with those appealing dark spots like a leopard, but still with a fighting spirit that tugs at the teeth with just the right chewiness.

La Piazza's menu has more than pizza, including Chicken Marsala, rigatoni and lasagna. We tried the baked four-cheese ravioli ($9) and found a pasta dish that equaled the pizza. It's a huge bowl with big squares of ravioli made cheesy with Romano, Parmesan, ricotta and that great mozzarella, all doused in a red cream sauce with curls of shaved Parmesan on top.

Just when you think every moderately-priced Italian restaurant is basically the same, a surprise like this comes along.

Dessert: La Piazza has the usual cannoli and chocolate cannoli, but we bypassed these in favor of the Italian Almond Wine Cake ($3) and Hot Zeppolis ($4).

We held our breath as our server checked to see if the chef had made the wine cake that day. She had. It was worth the anticipation. It looks like an ordinary Bundt cake in a soft butter yellow. But this cake has fine texture and flavor with impact. The wine taste really comes through and keeps the dessert from being too sweet even with a dusting of powdered sugar. We shared one piece. You'll want your own.

But you'll also want to make room for the zeppolis. If you've had beignets in New Orleans, you have an idea of what these little deep-fried pillows are like. They are nuggets of dough fried until just browned. La Piazza doesn't skimp on the powdered sugar. It's as if a blanket of snow has been blasted from a canon. Still, we rubbed the zeppolis around in the snowdrifts to get even more. Be warned that one plate can easily feed a party of four.

Drinks: La Piazza has a nice wine list, with more reds than whites and reasonable prices.

Lowdown: Now that La Piazza has been put on the culinary map, you won't want to be behind the trend. It's not a fancy or fussy place, just a destination for amazing pizza and pasta.

Our server, by the way, was amazing: pleasant, accommodating, knowledgeable, efficient. She made a great evening even better. We didn't catch her name. It's not that kind of place where the servers want you on their Facebook page. But Server Number 5: You know who you are.