Eat Here First in December: 3 new restaurants to try before everybody else does 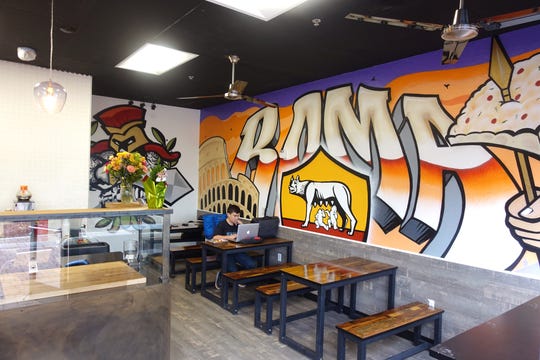 A pair of neighborhood pizza joints in Avondale and Laveen Village and a slick sushi lounge in central Phoenix round out December's edition of Eat Here First.

They say it’s best to finish strong, and where restaurant openings are concerned, 2018 certainly isn’t lacking for quantity. A veritable glut of new restaurants has popped up around Phoenix in the final two months of the year.

As usual, it will be a few months before we can see how the quality side of the equation pans out. But of the new spots I’ve tried, a few look especially promising in the early going.

A pair of neighborhood pizza joints in Avondale and Laveen Village and a slick sushi lounge in central Phoenix round out December's edition of Eat Here First.

The West Valley is well-acquainted with Justin Piazza. He’s one of the local pizza pioneers who helped popularize traditional Neapolitan-style pizza at La Piazza al Forno in Glendale and La Piazza PHX in downtown Phoenix.

Those who have sampled this style of pizza on the streets of Rome and patiently waited decades for it to come into vogue have cause to celebrate at last. And those who have no idea what Roman-style pizza al taglio is will want to pay careful attention to Piazza’s new venture, Piazza Romana, which opened at the end of November.

Buried in a culinary hellscape of mediocre chain restaurants at Gateway Pavilions in Avondale, Piazza’s feisty little shop sits just around the corner from Harkins Gateway Pavilions 18, the perfect spot to drop in for a slice (or three) before or after a show.

This is a tiny counter-service joint with a handful of tables and a spray-painted mural depicting Romulus and Remus, Il Colossseo and Roman gladiators. Unlike Rome, where it’s more typically sold by weight, Piazza Romana's pizza is served by the slice for dine in or carryout (delivery is forthcoming), in four to six rotating varieties, depending on the day and time.

Piazza is still fine-tuning in his technique, but his pizza is already excellent.

The high-hydration dough, cold fermented for four days and spread into sheet pans, results in a medium-thick crust that’s robust and deeply flavorful, crisp bordering on crunchy, with a gorgeous interior structure that has some heft but eats light.

This is some seriously crowd-pleasing stuff.

The toppings dictate the price, and while Piazza is holding back some of the more unique varieties in the early going, every slice I tried was a winner.

Meatier offerings include the Americana ($4), adorned with thick slabs of pepperoni; and the piccante ($4), made with slivers of spicy soppressata.

However, my early favorite — at least until the potato pizza finally appears — is the Amatriciana ($4), made like the pasta with a hefty dose of chewy pancetta, soft onions, the sharp sting of pecorino Romano and a spicy chile blast.

The other styles Piazza has in store can’t get here soon enough.